Donna Parker is the heroine of the seven volume book series for girls that was written by Marcia Levin under the pseudonym Marcia Martin from the 1950s through the 1960s. First published by Whitman from 1957 through 1964 in thick glossy picture cover editions, the series was revamped with new cover art in the late 1960s and then reprinted with a smaller, non-glossy picture cover. The series was discontinued by the mid-1970s.
Main Characters

Donna Parker is a 14-year-old girl living with her family in Summerfield, a small town two hours from New York City. She is popular, attractive and has dark hair and brown eyes. She is an excellent student who receives A's on her report card, serves on class committees & on the Junior High newspaper.

Fredricka (Ricky) West is Donna's best friend. Ricky and Donna are quite different but have a close bond. Red-haired and freckled, Ricky is dreamy, romantic and melodramatic. She is also a good student and has a passion for acting and drama.

Grace Parker is Donna's mother. She was a schoolteacher and now a full-time housewife. She is social, patient and caring. She tends to lecture Donna but also is a good shoulder for Donna to cry on.

Sam Parker is Donna's father. He is a salesman and has an excellent sense of humor. He likes to tease Donna, especially about boys. He is always very proud of Donna and her achievements.

James (Jimmy) Parker is Donna's younger brother. He is outgoing, playful and active. He is good at sports, loves baseball, basketball and football and plays noisy "war" games which annoy Donna. He also makes fun of, and teases, his older sister. His best friend is Skipper Gray who lives next door to the Parkers.

Paul Richard White is the friend and somewhat boyfriend of Donna. They go on some dates when he is a counselor at Camp Three Pines and she is a junior counselor at the nearby Camp Cherrydale. They also date during A Spring to Remember. Known by his middle name, Richard, up until A Spring to Remember, he decides to revert to his first name, Paul. He is handsome, intelligent and popular. He is a year older than Donna and briefly leaves school to pursue full-time work on the assumption his family is struggling financially because of his father's unemployment.

Joyce Davenport is a classmate of Donna's. Initially she is considered to be arrogant, aloof and cold but following an accident, Donna gets to know the real Joyce and finds her a sweet, shy, caring girl. Joyce is highly intelligent and is very interested in journalism, most likely due to the fact her father is the editor of the Summerfield newspaper.

Anne Franklin is a friend of Donna's from school. She is tall and blonde and has a good sense of humor. She loves animals and plays practical jokes.

Tommy Sheridan is a classmate of Donna's. He is smart with a flair for designing helicopters. His father owns a helicopter factory and Tommy was the target of spies because of his clever designs in Secret Agent.

Roger Norcross is Grace Parker's long-lost brother. He ran away as a teenager and the Norcross family heard very little of him afterwards. He appeared in Special Agent, later marrying Donna's teacher and heading back to his home in Hollywood. In A Spring to Remember Roger promised Donna a holiday in California if she got straight A's on her report card. Donna later visited Roger and his wife, Adele, during the book In Hollywood.

Adele Norcross (née Fischer) is a teacher of Donna's from Secret Agent. She is young and friendly. She assists with the running of the school newspaper and organizes the trip to New York for the newspaper staff. Roger Norcross and Adele fall in love and arrange to be married in Secret Agent.

The Stackhouse Family are family friends of the Parkers. They are first introduced in Takes a Giant Step when the Parker family holiday in Canada. The Stackhouses later move to Summerfield and their son, Jeff, stays temporarily with the Parker family in order to attend school at the start of the term while his parents arrange to move.

Mr Greer is the Principal of Summerfield Junior High.

Marjorie Dengrove is a young teacher from a wealthy family. Sam and Grace Parker arrange for her to stay at the Parker residence when they travel to Europe and India.

Logan Willis is a classmate of Donna's. He is elected school "Mayor" in Secret Agent. He is considered very handsome, smart and popular by his classmates.

Amy Alexander is a friend of Donna's from Camp Arawak. Amy is very smart and shy. She does not make friends easily and gets very nervous around boys. She has red hair and freckles, and at first Donna mistakes her for Ricky.

Thornton "Teddy" Bair is a boy who is a counselor at Caribe, a camp for boys located near Arawak. He is charming and handsome but also a gossip with little sense of responsibility.

Jennifer Bruestle lives next door to Mr and Mrs Norcross in California. She is the same age as Donna and the two become friends. Jennifer desperately wants to be an artist and feels that her parents are not very supportive. Jennifer has a younger brother who is Jimmy's age.

Linda Atkinson is a wealthy girl from Hollywood who is the same age as Donna. Adele Norcross arranges for Linda and Donna to catch up during Donna's holiday. Linda invites Donna to her mansion and elaborate party. Donna and Linda are friendly but do not have much in common.

Bruce Maslin is a dashing boy Donna meets on her way to visit her uncle and aunt in Hollywood. He is charming, amusing and good-looking. However, his lack of responsibility gets Donna into trouble on a few occasions during In Hollywood.

Mike Langley is a studious friend of Linda Atkinson. He is introduced during Donna's visit to California during "In Hollywood". He is very intelligent and hard-working. Donna enjoys his company, finding him reliable and interesting if not particularly fun.

Ellie Townshead is Bunny Knight's cousin. She is also a bridesmaid with Donna in A Spring to Remember. Donna and Ellie do not get along particularly well in that book, especially after Donna overhears Ellie making fun of her with one of the groomsmen. However, during the book In Hollywood, Donna and Ellie seem to get along better as they make arrangements to catch up in California. Ellie is an aspiring ballerina, very pretty and delicate. 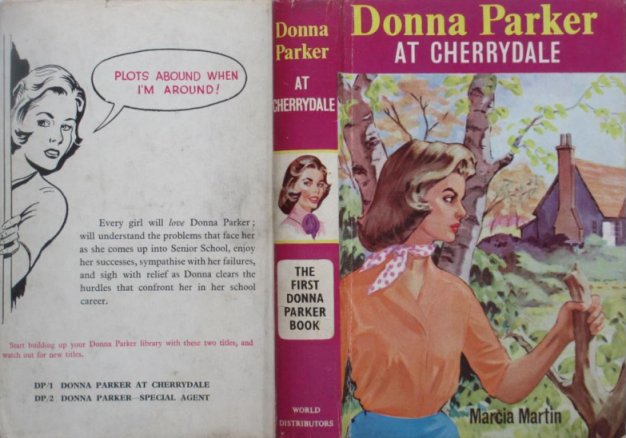 Donna and Ricky take jobs as junior counselors at Camp Cherrydale, a summer camp for young children run by Dr and Mrs Duvall.

As junior counselors, Donna and Ricky immerse themselves in camp life, enjoying meeting new people, getting to know their young charges, running activities and soaking up the lovely surroundings of the camp.

However, camp life is not all fun and games. Donna's senior counselor, Bunny, is acting very strangely, Dr and Mrs Duvall seem to be hiding something, Nancy, a young girl from Summerfield, is causing problems at the camp, and a mysterious house in the nearby woods has Donna and Ricky intrigued.

The summer is over and it is time for Donna and Ricky to return to Summerfield Junior High.

Things take a turn for the mysterious when her long-lost uncle appears in Summerfield, her friend, Tommy Sheridan, thinks he is being spied on, Donna's friends begin to ignore her, and a strange character, Mr Brown, is employed at Summerfield Junior High.

Little does Donna realise that an exciting trip to New York City will reunite her with old friends and solve all of the mysteries.

Donna's parents are offered the trip of a lifetime-Europe and India-the only catch is that Donna and Jimmy cannot travel with them.

A number of options are examined but finally it is decided that a young teacher from Jimmy's school will stay at the Parker family home and look after Donna and Jimmy until Mr and Mrs Parker return.

With less rules to worry about, Donna enjoys her new-found sense of independence; however, she learns that independence comes with some big responsibilities and new worries.

It's springtime in Summerfield and Donna is enjoying her last term at Summerfield Junior High.

With a diary full of dates with former class President, Richard White, an invitation to be a bridesmaid in New York, a trip to Hollywood on offer, and final exams, Donna is on cloud nine, but one sad event will change her whole outlook as well as changing Ricky's life forever.

Donna Parker is off to Hollywood! Staying with her aunt and uncle in glamorous Hollywood is the trip of a lifetime for Donna.

An exciting plane trip, dashing boys, movie studios, parties and a mysterious neighbor are all waiting for Donna as she spends time with her relatives and tours California.

It is not long before Donna learns some important lessons, in particular, the importance of looking beneath the surface.

After her exciting trip to California, Donna takes a job as a junior counselor at Camp Arawak for the remainder of her summer.

At first Donna finds camp life hard - Arawak is very different from Cherrydale, she does not know anyone, her charges are diverse and lively, and her senior counselor seems to be hiding something.

However, Donna soon gets accustomed to camp life, meeting new friends, taking on new tasks, and helping run the Drama department at the camp.

While different from Cherrydale, Arawak has its share of mysteries, and it does not take long for Donna to get caught up in some strange events.

Donna's family enjoy the last week of their summer vacation by heading to Canada for a few days to catch up with some old family friends, the Stackhouses.

Celebration ensues when the Stackhouses announce they will be moving to Summerfield, and their son, Jeff, travels back with the Parkers to commence school at the start of the term.

Living with her brother and Jeff makes Donna's life complicated as she tries to immerse herself at her new school, try out for the cheerleading squad, deal with a friend moving away and meeting new people.

Life is problematic for many in Summerfield with teenage parties getting out of control, but it appears that Jeff may hold the answer.